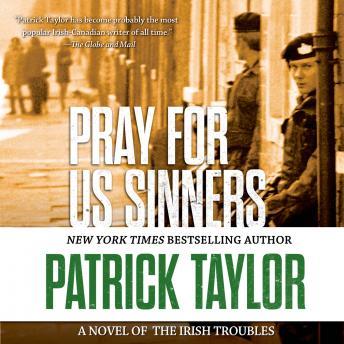 Pray for Us Sinners: A Novel of the Irish Troubles

Download or Stream instantly more than 55,000 audiobooks.
Listen to "Pray for Us Sinners: A Novel of the Irish Troubles" on your iOS and Android device.

A British Army bomb-disposal expert goes undercover to try to identify the source of the bombs being used by the Provisional Irish Republican Army in Pray for Us Sinners, a thrilling novel by New York Times bestseller Patrick Taylor
In Belfast in 1973 the Troubles are raging. Two Ulstermen. Two sides. On one, British Army bomb-disposal officer Marcus Richardson; on the other, Davy MacCutcheon, Provisional IRA armourer who has been constructing bombs since his teens. Both men are committed to their causes until events shatter their beliefs, leaving each with a crisis of faith and an overpowering need to get out-but with honour.
When he is nearly killed by an exploding car bomb, Marcus welcomes the offer of a transfer to the elite SAS-provided that he first accept an undercover mission to infiltrate the Falls Road ghetto, join the Provisional IRA, identify their upper echelon, and expose their bomb-maker.
When Davy's devices are used for civilian disruption rather than military targets, the bomb-maker begins to question what he's doing. His work is being used to maim and kill innocent people. His request to be discharged is countered by an order that he go on one last mission. Success will bring Davy redemption and permission to leave Ireland with Fiona Kavanagh, the woman he loves.
When the paths of the two men cross, Davy realizes that he can use Marcus's expertise in plastic explosives. A runaway series of events leaves both men in an abandoned farmhouse in the middle of a plot to kill the British Prime Minster. Can Marcus find a way to thwart the plan and escape with his life?