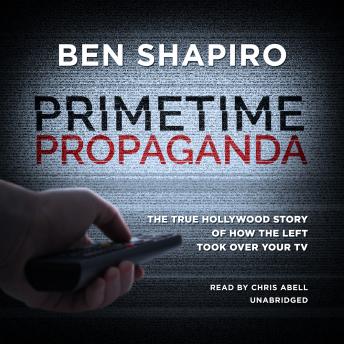 Primetime Propaganda: The True Hollywood Story of How the Left Took Over Your TV

Download or Stream instantly more than 55,000 audiobooks.
Listen to "Primetime Propaganda: The True Hollywood Story of How the Left Took Over Your TV" on your iOS and Android device.

Primetime Propaganda is the story of how television has been used over the past sixty years by Hollywood writers, producers, actors, and executives to promote their liberal ideals, to push the envelope on social and political issues, and to shape America in their own leftist image.In this thoroughly researched and detailed history of the television industry, the conservative columnist and bestselling author Ben Shapiro argues that left-leaning entertainment kingpins in Los Angeles and New York have leveraged-and continue to use-their positions and power to push liberal messages and to promote the Democratic Party while actively discriminating against their opponents on the right.

According to Shapiro, television isn't just about entertainment-it's an attempt to convince Americans that the social, economic, and foreign policy shaped by leftism is morally righteous.But don't take his word for it. Shapiro interviewed more than one hundred of the industry's biggest players, including Larry Gelbart (M*A*S*H), Marta Kauffman (Friends), David Shore (House), and Mark Burnett (Survivor). Many of these insiders boast that not only is Hollywood biased against conservatives, but that many of the shows being broadcast have secret political messages. After hearing this groundbreaking exposé, listeners will never watch television the same way again.