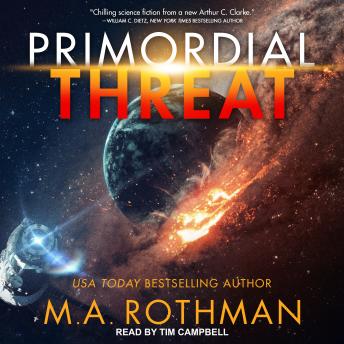 Download or Stream instantly more than 55,000 audiobooks.
Listen to "Primordial Threat" on your iOS and Android device.

The year is 2066 and the world is oblivious to the threat it faces.

The fate of humanity lies on the shoulders of Burt Radcliffe, the new head of NASA's Near Earth Object program. He's been rushing the completion of DefenseNet, a ring of satellites that are both part of an early-warning system as well as the means to eliminate incoming threats.

Yet Burt knows that despite the world's best efforts, nothing can be done about the alert he's just received. Coming out of deep space is a danger that's been approaching since the dawn of time. A black hole. An unstoppable threat that promises death for all in its wake.

Dave Holmes was a modern-day Einstein. As the original architect of DefenseNet, he'd had visions of this Primordial Threat before he disappeared, yet he'd left behind no details on how the problem might be solved. Can Holmes be found, and if so, will his solution even work?

The world has less than a year to find out.