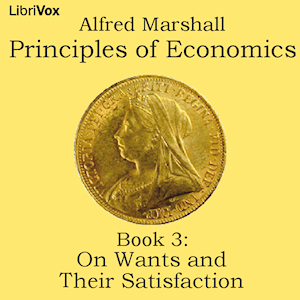 Principles of Economics, Book 3: On Wants and Their Satisfaction

Download or Stream instantly more than 55,000 audiobooks.
Listen to "Principles of Economics, Book 3: On Wants and Their Satisfaction" on your iOS and Android device.

Principles of Economics was a leading economics textbook of Alfred Marshall (1842-1924), first published in 1890. Marshall began writing the book in 1881, and he spent much of the next decade at work on it.

His plan for the work gradually extended to a two-volume compilation on the whole of economic thought; the first volume was published in 1890 to worldwide acclaim that established him as one of the leading economists of his time. It brought the ideas of supply and demand, of marginal utility and of the costs of production into a coherent whole, and became the dominant economic textbook in England for a long period. The second volume, which was to address foreign trade, money, trade fluctuations, taxation, and collectivism, was never published at all. (Summary from Wikipedia)

This reading is based on the eighth edition, published in 1920.