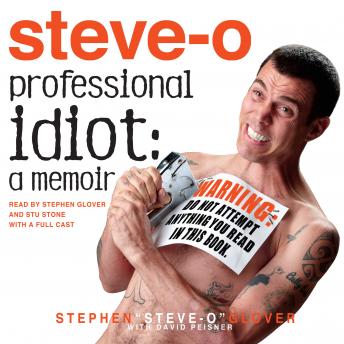 Download or Stream instantly more than 55,000 audiobooks.
Listen to "Professional Idiot: A Memoir" on your iOS and Android device.

From his early days videotaping crazy skateboard stunts to starring in the Jackass movies, there was little that Stephen 'Steve-O' Glover wouldn't do.Whether it was stapling his nutsack to his leg or diving into a pool full of elephant crap, almost nothing was out of bounds. As the stunts got crazier, his life kept pace. He developed a crippling addiction to drugs and alcohol, and an obsession with his own celebrity that proved nearly as dangerous. Only an intervention and a visit to a psychiatric ward saved his life. Today he has been clean and sober for more than three years.
Professional Idiot recounts the lunacy, the debauchery, the stunts, the drug addiction, and the path to recovery with bravado, humor, and heart.
'It's mind-blowing to me how utterly far gone Steve-O was, and how he looks back on it in this book with such intelligence, humor, and searing honesty. What a truly unbelievable life.'-- Johnny Knoxville
'A great book to read before you get on the roller coaster to hell, if you plan on surviving to tell about it like Steve-O did.'--Nikki Sixx, author of The Heroin Diaries
'This is the perfect book for people who hate reading.'--Tommy Lee, author of Tommyland
The feedback I've gotten on Facebook and Twitter from those of you who've read this book has been fascinating, heartwarming, and hilarious. I'm happy to keep answering your questions on there, and I encourage more of you to join in the discussion. Hope to hear from you soon, and thank you all so much.
Love,Steve-O