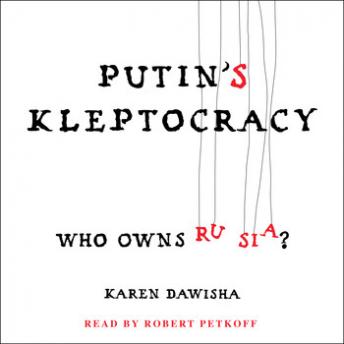 Download or Stream instantly more than 55,000 audiobooks.
Listen to "Putin's Kleptocracy: Who Owns Russia?" on your iOS and Android device.

The raging question in the world today is who is the real Vladimir Putin and what are his intentions. Karen Dawisha’s brilliant Putin’s Kleptocracy provides an answer, describing how Putin got to power, the cabal he brought with him, the billions they have looted, and his plan to restore the Greater Russia.

Russian scholar Dawisha describes and exposes the origins of Putin’s kleptocratic regime. She presents extensive new evidence about the Putin circle’s use of public positions for personal gain even before Putin became president in 2000. She documents the establishment of Bank Rossiya, now sanctioned by the US; the rise of the Ozero cooperative, founded by Putin and others who are now subject to visa bans and asset freezes; the links between Putin, Petromed, and “Putin’s Palace” near Sochi; and the role of security officials from Putin’s KGB days in Leningrad and Dresden, many of whom have maintained their contacts with Russian organized crime.

Putin’s Kleptocracy is the result of years of research into the KGB and the various Russian crime syndicates. Dawisha’s sources include Stasi archives; Russian insiders; investigative journalists in the US, Britain, Germany, Finland, France, and Italy; and Western officials who served in Moscow. Russian journalists wrote part of this story when the Russian media was still free. “Many of them died for this story, and their work has largely been scrubbed from the Internet, and even from Russian libraries,” Dawisha says. “But some of that work remains.”