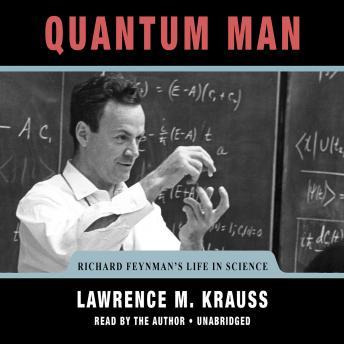 Download or Stream instantly more than 55,000 audiobooks.
Listen to "Quantum Man: Richard Feynman's Life in Science" on your iOS and Android device.

A gripping new scientific biography of the revered Nobel Prize–winning physicist (and curious character) Richard Feynman.
Perhaps the greatest physicist of the second half of the twentieth century, Richard Feynman changed the way we think about quantum mechanics, the most perplexing of all physical theories. Here Lawrence M. Krauss, himself a theoretical physicist and bestselling author, offers a unique scientific biography: a rollicking narrative coupled with clear and novel expositions of science at the limits. An immensely colorful person in and out of the office, Feynman revolutionized our understanding of nature amid a turbulent life. From the death of Feynman’s childhood sweetheart during the Manhattan Project to his reluctant rise as a scientific icon, Krauss presents that life as seen through the science, providing a new understanding of the legacy of a man who has fascinated millions. An accessible reflection on the issues that drive physics today, Quantum Man captures the story of a man who was willing to break all the rules to tame a theory that broke all the rules.