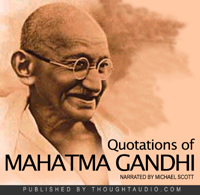 Download or Stream instantly more than 55,000 audiobooks.
Listen to "Quotations of Mahatma Gandhi" on your iOS and Android device.

Mohandas Karamchand Gandhi, commonly known around the world as Mahatma Gandhi, was a major political and spiritual leader of India and the Indian independence movement. Gandhi was the pioneer of Satyagraha - resistance to tyranny through mass civil disobedience, firmly founded upon total non-violence. Assuming leadership of the Indian National Congress in 1921, Gandhi led nationwide campaigns for easing poverty, for expanding women's rights, for building religious and ethnic amity, for ending untouchability, for increasing economic self-reliance, but above all for achieving the independence of India from foreign domination. He was imprisoned for many years, on numerous occasions, in both South Africa and India and he undertook long fasts as a means of both self-purification and social protest. He was assassinated in 1948.