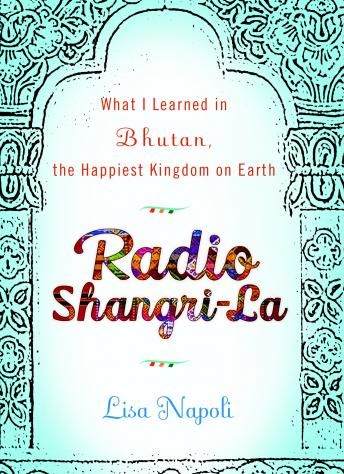 Radio Shangri-La: What I Discovered on my Accidental Journey to the Happiest Kingdom on Earth

Download or Stream instantly more than 55,000 audiobooks.
Listen to "Radio Shangri-La: What I Discovered on my Accidental Journey to the Happiest Kingdom on Earth" on your iOS and Android device.

Lisa Napoli was in the grip of a crisis, dissatisfied with her life and her work as a radio journalist. When a chance encounter with a handsome stranger presented her with an opportunity to move halfway around the world, Lisa left behind cosmopolitan Los Angeles for a new adventure in the ancient Himalayan kingdom of Bhutan—said to be one of the happiest places on earth.

Long isolated from industrialization and just beginning to open its doors to the modern world, Bhutan is a deeply spiritual place, devoted to environmental conservation and committed to the happiness of its people—in fact, Bhutan measures its success in Gross National Happiness rather than in GNP. In a country without a single traffic light, its citizens are believed to be among the most content in the world. To Lisa, it seemed to be a place that offered the opposite of her fast-paced life in the United States, where the noisy din of sound-bite news and cell phones dominate our days, and meaningful conversation is a rare commodity; where everyone is plugged in digitally, yet rarely connects with the people around them.

Thousands of miles away from everything and everyone she knows, Lisa creates a new community for herself. As she helps to start Bhutan’s first youth-oriented radio station, Kuzoo FM, she must come to terms with her conflicting feelings about the impact of the medium on a country that had been shielded from its effects. Immersing herself in Bhutan’s rapidly changing culture, Lisa realizes that her own perspective on life is changing as well—and that she is discovering the sense of purpose and joy that she has been yearning for.

In this smart, heartfelt, and beautifully written book, sure to please fans of transporting travel narratives and personal memoirs alike, Lisa Napoli discovers that the world is a beautiful and complicated place—and comes to appreciate her life for the adventure it is.