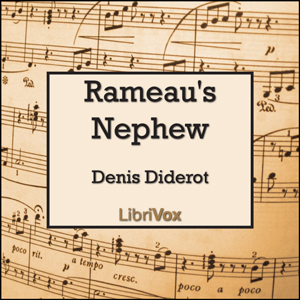 Download or Stream instantly more than 55,000 audiobooks.
Listen to "Rameau's Nephew" on your iOS and Android device.

Rameau's Nephew, or the Second Satire (French: Le Neveu de Rameau ou La Satire seconde) is an imaginary philosophical conversation written by Denis Diderot, probably between 1761 and 1772. It was first published in 1805 in German translation by Goethe, but the French manuscript used has subsequently disappeared. The German version was translated back into French by de Saur and Saint-Geniès and published in 1821. The first published version based on French manuscript appeared in 1823 in the Brière edition of Diderot's works. Modern editions are based on the complete manuscript in Diderot's own hand found by Georges Monval, the librarian at the Comédie-Française, in 1890 while buying music scores from a second-hand bookshop in Paris.[1] Monval published his edition of the manuscript in 1891. Subsequently, the manuscript was bought by the Pierpont Morgan Library in New York. It is unclear why Diderot never had it published in his time. Given the satirical tone of the work, it has been suggested that the author prudently refrained from giving offence. (Summary by wikipedia)