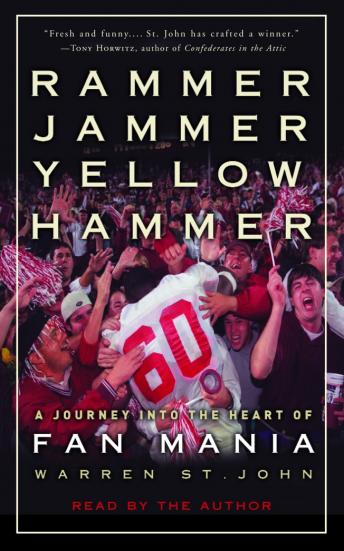 Rammer Jammer Yellow Hammer: A Journey into the Heart of Fan Mania

Download or Stream instantly more than 55,000 audiobooks.
Listen to "Rammer Jammer Yellow Hammer: A Journey into the Heart of Fan Mania" on your iOS and Android device.

"Fresh and funny… St. John has crafter a winner.” —Tony Horwitz, author of Confederates in the Attic

In the life of every sports fan, there comes a moment of reckoning. It may happen when your team wins on a last-second field goal and you suddenly find yourself clenched in a loving embrace with a large hairy man you’ve never met. . . . Or in the long, hormonally depleted days after a loss, when you’re felled by a sensation similar to the one you first experienced following the death of a pet. At such moments the fan is forced to confront the question others—spouses, friends, children, and colleagues—have asked for years:

Why do I care?

What is it about sports that turns otherwise sane, rational people into raving lunatics? Why does winning compel people to tear down goalposts, and losing, to drown themselves in bad keg beer? In short, why do fans care?

In search of the answers to these questions, Warren St. John seeks out the roving community of RVers who follow the Alabama Crimson Tide from game to game across the South. A movable feast of Weber grills, Igloo coolers, and die-hard superstition, these are characters who arrive on Wednesday for Saturday’s game: Freeman and Betty Reese, who skipped their own daughter’s wedding because it coincided with a Bama game; Ray Pradat, the Episcopalian minister who watches the games on a television set beside his altar while performing weddings; John Ed (pronounced as three syllables, John Ay-ud), the wheeling and dealing ticket scalper whose access to good seats gives him power on par with the governor; and Paul Finebaum, the Anti-Fan, a wisecracking sports columnist and talk-radio host who makes his living mocking Alabama fans—and who has to live in a gated community for all the threats he receives in response.

In no time at all, St. John himself is drawn into the world of full-immersion fandom: he buys an RV (a $5,500 beater called The Hawg) and joins the caravan for a football season, chronicling the world of the extreme fan and learning that
in the shadow of the stadium, it can all begin to seem strangely normal.

Along the way, St. John takes readers on illuminating forays into the deep roots of humanity’s sports mania (did you know that tailgaters could be found in eighth-century Greece?), the psychology of crowds, and the surprising neuroscience behind the thrill of victory.

Reminiscent of Confederates in the Attic and the works of Bill Bryson, Rammer Jammer Yellow Hammer is not only a travel story, but a cultural anthropology of fans that goes a long way toward demystifying the universal urge to take sides and to win.