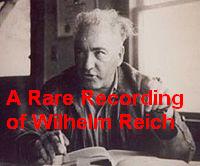 A Rare Recording of Wilhelm Reich

Download or Stream instantly more than 55,000 audiobooks.
Listen to "A Rare Recording of Wilhelm Reich" on your iOS and Android device.

Wilhelm Reich (March 24, 1897 - November 3, 1957) was an Austrian-American psychiatrist and psychoanalyst, known as one of the most radical figures in the history of psychiatry. Reich argued that mental illness and some physical illnesses were the result of deficiencies of cosmic energy, as measured in units called "orgones", and lack of orgasms. This recording is his lecture on his Orgone theory.