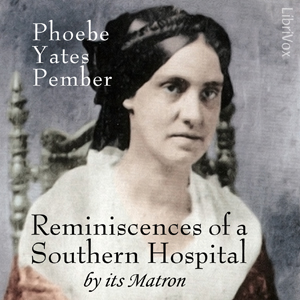 Reminiscences of a Southern Hospital, by Its Matron

Download or Stream instantly more than 55,000 audiobooks.
Listen to "Reminiscences of a Southern Hospital, by Its Matron" on your iOS and Android device.

Phoebe Yates Pember served as a matron in the Confederate Chimborazo military hospital in Richmond, Virginia, during the Civil War, overseeing a dietary kitchen serving meals to 300 or more wounded soldiers daily. Reminiscences of a Southern Hospital is her vivid recounting of hospital life and of her tribulations (and personal growth) as a female administrator. To follow her from day one, when she is greeted with "ill-repressed disgust" that "one of them had come," and she, herself, "could only understand that the position was one which dove-tailed the offices of housekeeper and cook" to the day when she as exerts control over the hospital's "medicinal whiskey barrel" is to watch a woman find herself. Besides describing "daily scenes of pathos," Pember gives a horrifying account of the prisoner exchange of November 1864 ("living and dead . . . not distinguishable"), and also of the evacuation and burning of Richmond in 1865. Her memoirs were serialized in Cosmopolite magazine in 1866, then reprinted in book form in 1879 under the title A Southern Woman's Story. Pember was honored by the US Postal Service with a stamp in 1995. (Summary by Sue Anderson)