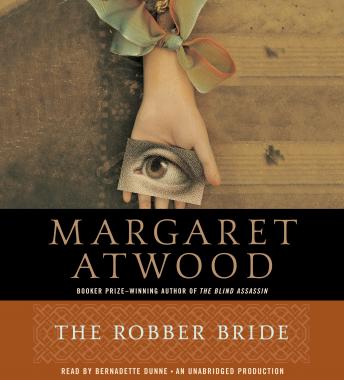 Download or Stream instantly more than 55,000 audiobooks.
Listen to "The Robber Bride" on your iOS and Android device.

One of Margaret Atwood’s most unforgettable characters lurks at the center of this intricate novel like a spider in a web. The glamorous, irresistible, unscrupulous Zenia is nothing less than a fairy-tale villain in the memories of her former friends. Roz, Charis, and Tony—university classmates decades ago—were reunited at Zenia’s funeral and have met monthly for lunch ever since, obsessively retracing the destructive swath she once cut through their lives. A brilliantly inventive fabulist, Zenia had a talent for exploiting her friends’ weaknesses, wielding intimacy as a weapon and cheating them of money, time, sympathy, and men. But one day, five years after her funeral, they are shocked to catch sight of Zenia: even her death appears to have been yet another fiction. As the three women plot to confront their larger-than-life nemesis, Atwood proves herself a gleefully acute observer of the treacherous shoals of friendship, trust, desire, and power.