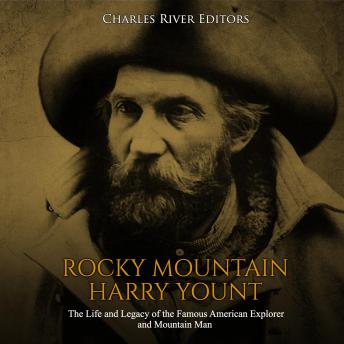 Rocky Mountain Harry Yount: The Life and Legacy of the Famous American Explorer and Mountain Man

Download or Stream instantly more than 55,000 audiobooks.
Listen to "Rocky Mountain Harry Yount: The Life and Legacy of the Famous American Explorer and Mountain Man" on your iOS and Android device.

By the golden age of the mountain man in the mid-19th-century, there were perhaps only 3,000 living in the West. Their origins were disparate, although they included many Anglo-Americans. A good number hailed from wilderness regions of Kentucky and Virginia and throughout the newly purchased Louisiana Territory, which occupied the entire central section of the continent. French Canadians traveled from the north to work in the fur trade, while Creole-Europeans represented approximately 15% of the men known to be living the isolated mountain life. Others were of Métis, Spanish, American, Black, Indian, and mixed-blood origin, most often Iroquois or Delaware. Most came to the West in their late adolescent years, the oldest learning the trade in their 30s. Many roamed the west for as long as their constitutions would hold up under constant attacks on their health and personal safety. Some stayed too long and failed to survive the experience. Among the most famous, Jim Bridger arrived at the age of 16, while Edward Robinson was eventually killed in his 60s by what were known as "bad snakes," a reference to the Snake tribe in Idaho country. Jim Beckwourth left the mountains at 68 and Old Bill Williams died at the age of 62 when a band of Utes "made him to come.'
During the mid-19th century, the mountain man persona transformed into that of a more multifaceted individual. Frontiersmen who were once alone in the West were hired on as guides and scouts for the military, or for settlement caravans crossing the new trails to the Pacific Northwest and California. The development of the New Mexico Territory became a center for the silver trade, and Californian settlements virtually exploded thanks to the Gold Rush of 1849. Mountain men dabbled in the business world as well, including those enterprises connected to supplies, shipping, and hunting for expanding communities. Several became favorite figures back on the East Coast, where people wanted to hear of tales from the exotic West.
A third generation of mountain men followed the Civil War as veterans headed west to test their survival skills learned in the military. The search for opportunities near the Pacific was not merely an option exercised by unemployed soldiers who could find no other use for themselves, as many had no home to which they could return. Meanwhile, the opportunities widened for prospectors, hunters, merchants, farmers, ranchers, and lawmen, occupations not yet in existence for the prior generation.
In the case of Civil War veteran Harry S. Yount, a new niche opened with the federal government for the early maintenance of forests in the West, and for the protection of wildlife in the northern Rocky Mountains. Through his service as the first gamekeeper of what was to become Yellowstone National Park, Yount is to this day honored as a prototypical model in the establishment of the National Park Service. Due to his two annual reports to the Department of the Interior later, he is recognized as the first individual to recommend a specialized force with which to guarantee land and wildlife management in the first years of American environmentalism, and pursuant to his knowledge of the wild country of Montana and Wyoming, he was a crucial employee of one of the first major geological expeditions to the Rocky Mountains that charted the land from Montana to Arizona and provided the first thorough scientific study of the great mountain range. Despite some leg dysfunction from a wound received in the war, and with little experience as a mountaineer, Yount joined several geologists and cartographers in the first ascents of the major peaks of the Grand Teton Range. His era was the first in which some in the West began to seriously consider the preservation of once abundant wildlife species.