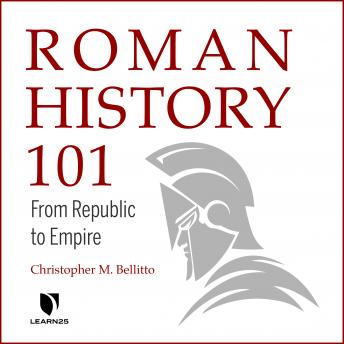 Roman History 101: From Republic to Empire

Download or Stream instantly more than 55,000 audiobooks.
Listen to "Roman History 101: From Republic to Empire" on your iOS and Android device.

No civilization is so intertwined with the history of Christianity, and the greater Western world, as Rome. Now, you are invited to explore ancient Rome's legacy with award-winning professor and prolific author Christopher M. Bellitto.

In this fascinating audio course on the Roman monarchy, republic, and empire, you will explore the essentials of Roman civilization: the creation of a city at the center of world history, its political legacy, its architectural and cultural achievements, its treatment of women and slaves, and its tragic flaws.

You will begin by placing ancient Rome in world history by looking at its origins and contexts in terms of geography and chronology. You will then explore the overlooked monarchy that ran for over two centuries until it was replaced by a republic that slowly took over the Mediterranean for 500 years. You will follow Rome as it defeated Carthage in three Punic Wars, facing challengers like Hannibal.

As you travel from the Republic to the Empire to Rome's eventual "fall," you will encounter such infamous figures as Julius Caesar, Octavian, Marc Antony, Cleopatra, Caligula, and Nero. You will see how paganism, Judaism, and Christianity interacted, often violently, and how Christianity transformed a stumbling empire. Finally, you will ask whether Rome truly fell at all.

This course is part of the Learn25 collection and includes a free PDF study guide.