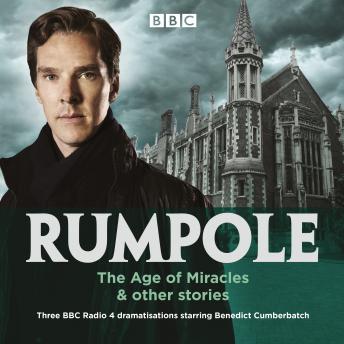 Download or Stream instantly more than 55,000 audiobooks.
Listen to "Rumpole: The Age of Miracles & other stories: Three BBC Radio 4 dramatisations" on your iOS and Android device.

Rumpole and the Bubble Reputation
Erskine-Brown is working on a sordid ABH and affray case which allegedly occurred in a Soho night club. When he and Rumpole visit the disreputable scene of the crime, they meet Maurice Machin, the editor of the Daily Beacon, whose paper is being sued for libel.

Rumpole and the Age of Miracles
Hilda's distant relation, The Reverend Timothy Donkin, looks set to be defrocked as Canon of Lawnchester Cathedral unless Rumpole can convince an Ecclesiastical Court that adultery did not take place in the nearby Saint Edithna Hotel.

Rumpole and the Tap End
Tony Timson finds himself in hot water when charged with the attempted drowning of his wife April, while sharing a bath with her. Rumpole not only defends Tony, but also finds he must protect Judge Guthrie Featherstone QC, who upsets women everywhere with sexist pronouncements about their proper place in the tub.