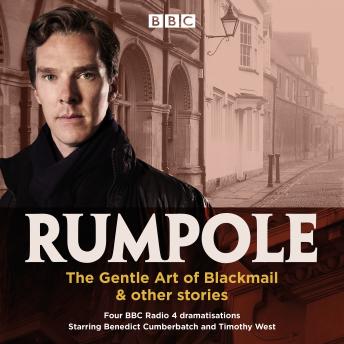 Download or Stream instantly more than 55,000 audiobooks.
Listen to "Rumpole: The Gentle Art of Blackmail & other stories: Four BBC Radio 4 dramatisations" on your iOS and Android device.

Rumpole and the Man of God
It is 1959, and Rumpole must defend a clergyman accused of shoplifting who, although he clearly did not commit the crime, is curiously reluctant to be cross-examined under oath. Meanwhile, Hilda (she who must be obeyed) has big news…

Rumpole and the Explosive Evidence
Rumpole defends a well-known safe blower and exposes the underhand behaviour of one Dirty Dickerson, a senior police officer who is quite prepared to tamper with evidence.

Rumpole and the Gentle Art of Blackmail
In 1964 Rumpole returns to Oxford, where he studied law, to defend a young gardener who is accused of blackmailing the Master of St Joseph’s College. Their friendship had provoked rumours of homosexuality – still illegal in those days – and the Master says he has been threatened with a public accusation.

Rumpole and the Expert Witness
Rumpole is asked to defend a GP, Dr Ned Dacre, who is accused of murdering his wife, Sally. The plot thickens when the local pathologist turns out to have history with Dr Ned…