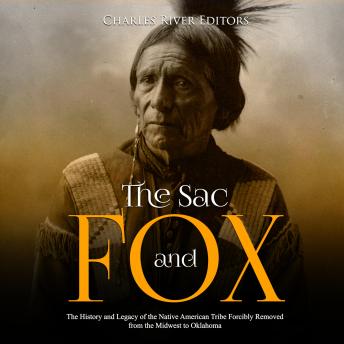 Sac and Fox, The: The History and Legacy of the Native American Tribe Forcibly Removed from the Midwest to Oklahoma

Download or Stream instantly more than 55,000 audiobooks.
Listen to "Sac and Fox, The: The History and Legacy of the Native American Tribe Forcibly Removed from the Midwest to Oklahoma" on your iOS and Android device.

The development of North America as a series of British colonies prior to the end of the 18th century went ahead without any definitive policy in regards to the Native Americans who were impacted, displaced and not infrequently overwhelmed by the process. The vast majority of Native American people continued to live in a state of grace long after the formation of the colonies and did not begin to feel the impact until the expansion west. Likewise, there could never be a coordinated, pan-tribal unity to confront this gathering invasion, since the indigenous population of the land was heterogeneous, speaking some 300 separate languages, and thousands of regional dialects, and very often they were at war with one another. Some saw an advantage in collaboration with the forces of colonization, and some not. The fate of the former was usually some form of unequal assimilation, and of the latter, removal or extermination, and often both.

On August 4, 1824, a treaty was signed between the Sac and Fox and the government of the United States whereby both relinquished all claim to land in Missouri lying between the Missouri and Mississippi Rivers, in exchange for a mere $1,000 annuity running for 10 years and a provision by the government to provide a blacksmith and other laborers, farming implements, and cattle.

Then, a year later, the federal government decided to deal once and for all with the ongoing inter-tribal warfare along the upper Mississippi by creating defined borders between the various tribal territories. In August 1825, a grand council was convened at Prairie du Chein, situated more or less at the confluence of the Mississippi and Wisconsin Rivers, where members of the Ojibwe, Dakota, Sauk, Fox, Winnebago, Menominee, Iowa, Ottawa, and Potawatomi attended, and it has often been remarked that the feat of gathering together a convention of so many mutually antagonistic groups was an achievement in itself.