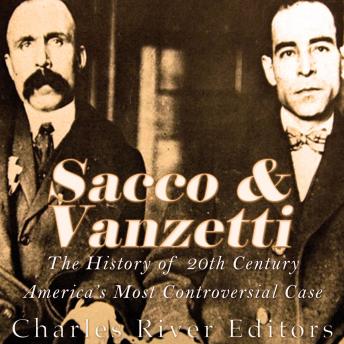 Sacco and Vanzetti: The History of 20th Century America's Most Controversial Case

Download or Stream instantly more than 55,000 audiobooks.
Listen to "Sacco and Vanzetti: The History of 20th Century America's Most Controversial Case" on your iOS and Android device.

There are few cases in American history as well known as Sacco and Vanzetti, and perhaps none of them were as controversial or socially charged as the trials against the two Italian immigrants in the early 20th century. The two avowed anarchists were ultimately tried and executed for murder and armed robbery, but the case said as much about the society trying them as it did about their guilt or innocence.

Nearly 90 years later, there is still a heated debate over whether the two men, who arduously asserted their innocence, were actually guilty, but what is clear is that many Americans at the time believed they were being unjustly accused based on anti-Italian prejudice and disdain for their political beliefs. After they were arrested and charged, a number of respected celebrities lobbied on their behalf, including Albert Einstein, H.G. Wells, and future Supreme Court justice Felix Frankfurter, which compelled Massachusetts’ governor to appoint a commission to investigate the case even after Sacco and Vanzetti had been convicted and sentenced to death. Ultimately, however, the commission upheld the finding of guilty, and the two men were electrocuted to death in August 1927.

Even in the wake of the executions, people continued to bring up the case, not only in an effort to determine whether the two were actually guilty but also to decry the perceived injustice. H.G. Wells compared the outcome to the Dreyfus Affair, writing, “The guilt or innocence of these two Italians is not the issue that has excited the opinion of the world. Possibly they were actual murderers, and still more possibly they knew more than they would admit about the crime.... Europe is not ‘retrying’ Sacco and Vanzetti or anything of the sort. It is saying what it thinks of Judge Thayer. Executing political opponents as political opponents after the fashion of Mussolini and Moscow we can understand, or bandits as bandits; but this business of trying and executing murderers as Reds, or Reds as murderers, seems to be a new and very frightening line for the courts of a State in the most powerful and civilized Union on earth to pursue.”

Sacco and Vanzetti: The History of 20th Century America’s Most Controversial Case chronicles the notorious trial and execution of the two Italian anarchists.