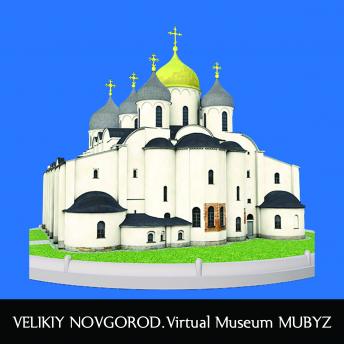 The audioguide tells the story, describes the architecture, and reports interesting facts about the Hagia Sophia Cathedral in Novgorod, one of the oldest Russian churches. According to Novgorod's first chronicle, it was erected in the years 1045 - 1050 "on the order of Prince Jaroslav, his son Vladimir and Archbishop Luca." Prior to its construction there were no stone buildings in Novgorod. Byzantine Masters from Kiev, who had close ties to the Byzantine Empire, were invited.

The Hagia Sophia cathedral has a complex structure. Once adopted as a model, the Byzantine church system with a Greek cross-shaped church was surmounted by a dome. The church was adapted to the requirements of the prince. In Kiev, and in Novgorod, a church that had the same meaning as Hagia Sophia of Constantinople, was needed, to represent the main church of the territory. For this reason, both churches were dedicated to Sofia, which means Wisdom of God, rather than a saint or a holiday.

The prince needed a great church, to show his wealth and splendor. The central dome, according to a tradition, dating back to 1408, is golden. On the cross that overhangs there is a dove in relief, symbolizing the Holy Spirit. According to legend, a dove resting on the cross of Hagia Sophia remained petrified by horror, after seeing the bloody massacre that the Opri?niki's army of Ivan the Terrible inflicted upon the rebel city.

Subsequently, one of the monks appeared to Our Lady and told him that as long as there was the dove on the cross, the city would be protected.

You can examine the 3D model of the church and observe its interior through the MuByz App. The audioguide has been made by professionals in the field of history and art.