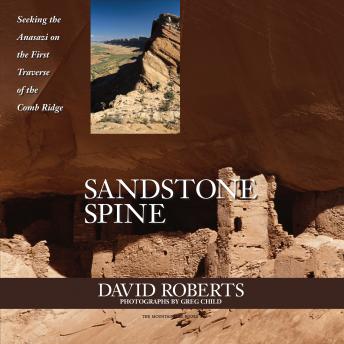 Sandstone Spine: Seeking the Anasazi on the First Traverse of the Comb Ridge

Download or Stream instantly more than 55,000 audiobooks.
Listen to "Sandstone Spine: Seeking the Anasazi on the First Traverse of the Comb Ridge" on your iOS and Android device.

On September 1, 2004, three middle-aged buddies set out on one of the last geographic challenges never before attempted in North America: to hike the Comb Ridge in one continuous push. The Comb is an upthrust ridge of sandstone—virtually a mini-mountain range—that stretches almost unbroken for a hundred miles from just east of Kayenta, Arizona, to some ten miles west of Blanding, Utah. To hike the Comb is to run a gauntlet of up-and-down severities, with the precipice lurking on one hand, the fiendishly convoluted bedrock slab on the other—always at a sideways, ankle-wrenching pitch. There is not a single mile of established trail in the Comb's hundred-mile reach.

The friends were David Roberts, writer, adventurer, famed mountaineer of decades past, at age 61 the graybeard of the bunch; Greg Child, renowned mountaineer and rock climber, age 47; and Vaughn Hadenfeldt, a wilderness guide intimately acquainted with the canyonlands, age 53. They came to the Comb not only for the physical challenge, but to seek out seldom-visited ruins and rock art of the mysterious Anasazi culture. Each brought his own emotions on the journey; the Comb Ridge would test their friendship in ways they had never before experienced.

Searching for the stray arrowhead half-smothered in the sand or for the faint markings on a far sandstone boulder that betokened a little-known rock art panel, becomes a competitive sport for the three friends. Along the way, they ponder the mystery, bringing the accounts of early and modern explorers and archaeologists to bear: Who were the vanished Indians who built these inaccessible cliff dwellings and pueblos, often hidden from view? Of whom were they afraid and why? What caused them to suddenly abandon their settlements around 1300 AD? What meaning can be ascribed to their phantasmagoric rock art? What was their relationship to the Navajo, who were convinced the Anasazi had magical powers and could fly?