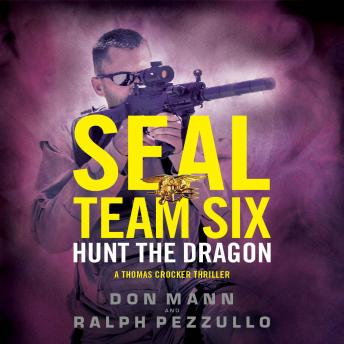 Download or Stream instantly more than 55,000 audiobooks.
Listen to "SEAL Team Six: Hunt the Dragon" on your iOS and Android device.

The North Korean government is days away from realizing its nuclear ambitions and only the heroes of SEAL Team Six can stop it.

Chief Warrant Officer Thomas Crocker of SEAL Team Six's Black Cell is in Las Vegas after conducting a training exercise in the desert with new members of the team. Lounging by the pool at Caesar's Palace, he witnesses an argument between hotel security guards and three Asian men in corporate attire that quickly turns physical. Giving chase, he soon corners the businessmen, who claim to be Chinese diplomats under the protection of diplomatic immunity. Except the men don't respond when the head of hotel security -- Crocker's old friend -- addresses them in Mandarin.

That night, someone hacks into the Nevada Power Company system, and Las Vegas goes completely dark. The businessmen set their hotel suite on fire and escape amidst the chaos. At the same time, James Dawkins, a brilliant scientist with top-secret clearance, disappears from a conference in Geneva and wakes to find himself in a North Korean bunker with instructions to solve an engineering problem that will enable North Korea to launch nuclear attacks on its enemies worldwide.

Chasing a trail of evidence that takes them from U.S. soil to international waters to China and North Korea, Crocker and the rest of SEAL Team Six find themselves in the middle of an international plot with dangerous geopolitical ramifications. The North Korean government will stop at nothing to realize its long-held nuclear ambitions -- but it'll have to get through some of America's most highly trained warriors first.