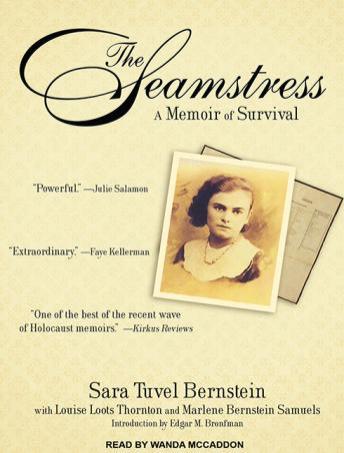 Download or Stream instantly more than 55,000 audiobooks.
Listen to "The Seamstress" on your iOS and Android device.

Growing up, Sara (Seren) Tuvel was the smartest, most ambitious girl in
her Romanian mountain village. When she won and accepted a scholarship
to a Gentiles-only Gymnasium, she was forced to make a decision that
would change her path forever. At thirteen, faced with a teacher's
anti-Semitism, Seren walked out of her classroom and into a new
existence. She became the apprentice to a seamstress, and her skill with
needle and thread enabled her again and again to patch the fraying
pieces of her life. As the Nazis encircled the country and bombs rained
down, Seren stitched her way to survival, scraping together enough money
to provide for her family. When she, her younger sister Esther, and two
friends were sent to the Ravensbruck concentration camp in Germany, the
four girls became one another's shelter.

Told with the same old-fashioned narrative power as the novels of Herman
Wouk, The Seamstress is the true story of Seren (Sara) Tuvel Bernstein
and her survival during wartime. A story of tragedy told in raw,
powerful language, it is also a dramatic tale of courage, intimate
friendship, romance, and startling good fortune that will have listeners
cheering.