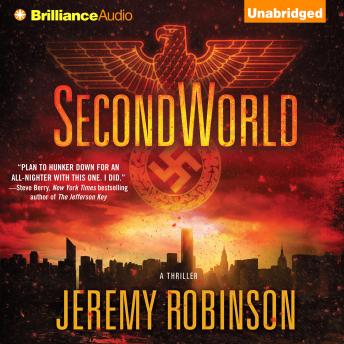 Download or Stream instantly more than 55,000 audiobooks.
Listen to "Secondworld" on your iOS and Android device.

Lincoln Miller, an ex-Navy SEAL turned NCIS special agent, is sent to Aquarius, the world’s only sub-oceanic research facility, located off the Florida Keys, to investigate reports of ocean dumping. A week into his stay, strange red flakes descend from the surface. Scores of fish are dead and dying, poisoned by the debris that turns to powder in Miller’s fingers and tastes like blood.

Miller heads for the surface, ready to fight whoever is polluting on his watch. But he finds nothing. No ships. No polluters.

Instead, he finds a cloudless sky full of red particles dropping like snow and coating the ocean with a thick film that stretches to the horizon. When a dead blue whale collides with Aquarius, Miller begins a harrowing race to escape the affected area. Cut off from the rest of the world and surrounded by death, Miller makes his way to Miami, where he discovers just one survivor and the awful truth: the strange phenomenon that robbed the air of its life-giving oxygen was an attack by an enemy reborn from the ashes of World War II. And they’re just getting started. Miami, Tel Aviv, and Tokyo have all been destroyed. Millions are dead.

And if Miller can’t track down and stop those responsible in seven days, the rest of the world is next.