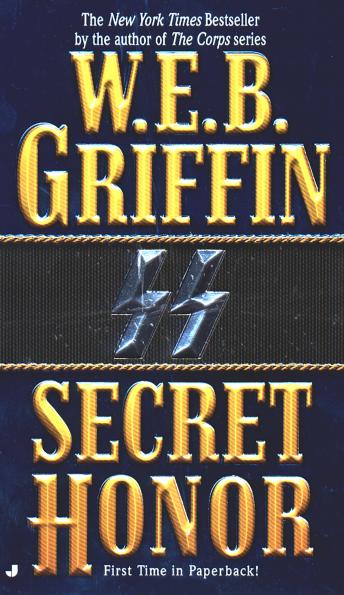 Download or Stream instantly more than 55,000 audiobooks.
Listen to "Secret Honor" on your iOS and Android device.

A crackling new novel in the bestselling Honor Bound series, by the master of the military thriller.As with his three enormously popular series--Brotherhood of War, The Corps, and Badge of Honor--Honor Bound and Blood and Honor, W. E. B. Griffin's novels of World War II espionage in Germany and Argentina, became immediate bestsellers. These are 'immensely entertaining adventures' (Kirkus Reviews), 'superior war stories' (Library Journal) 'whose twists and turns keep readers guessing until the last page' (Publishers Weekly). Now, in Secret Honor, Griffin creates his most rousing novel yet.In Wolf's Lair, a German general works toward the assassination of Adolf Hitler. In Buenos Aires, the general's son, codenamed Galahad, falls under suspicion by the SS after a Nazi operation suddenly goes bad. In the middle of it all is OSS agent Cletus Frade, who knows the identity of them both and what they will do nextif they can survive that long. For not only are SS and Abwehr officers hot on their trails in both countries, but the OSS has branded Frade a rogue agent and is determined to shake the truth from him, at whatever cost. If Frade can't figure out a way to hold them all off, then the futures of all three men may be very short indeed.Written with all the special flair that Griffin's readers expect, filled with high drama and real heroes, Secret Honor is further proof, in Tom Clancy's words, that 'Griffin is a storyteller in the grand tradition.' --This text refers to an out of print or unavailable edition of this title.