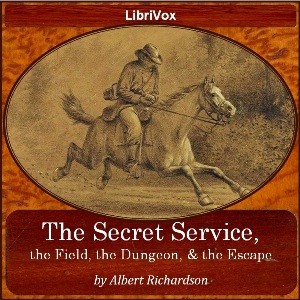 Download or Stream instantly more than 55,000 audiobooks.
Listen to "The Secret Service" on your iOS and Android device.

Albert Richardson was a reporter for Horace Greeley's New York Tribune when he volunteered to hazard an undercover journey through the American south, reporting incognito on the growing secession crisis in that region. With the outbreak of the Civil War in April 1861, he attached himself to the Union armies as a war correspondent, sending dispatches from the fields of battle for the next two years. Then, in May 1863, while attempting to pass a Confederate battery outside Vicksburg, Richardson found himself thrown from a burning barge into the Mississippi River, swimming for his life with a squad of Union soldiers and several other reporters. Captured as a prisoner, he was at first confident that as a civilian newspaperman he would be quickly exchanged. Instead, he was to spend the next 18 months in various prisoner of war camps. Seizing at last an opportunity for escape, he set out to cross the snowy Appalachians in the dead of winter, heading for Union lines in Tennessee, assisted by a secret network of slaves, Unionists, and bushwhackers. Albert Richardson's own personal memoir of his wartime adventures, published in 1865, offers readers a rousing historical narrative presented with a journalist's eye for detail. (Summary by Maria Kasper)