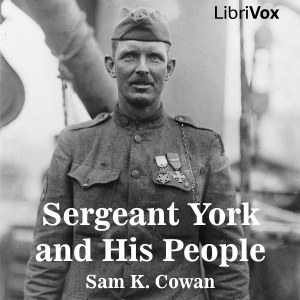 Sergeant York and His People

Download or Stream instantly more than 55,000 audiobooks.
Listen to "Sergeant York and His People" on your iOS and Android device.

From a cabin back in the mountains of Tennessee, forty-eight miles from the railroad, a young man went to the World War. He was untutored in the ways of the world. Caught by the enemy in the cove of a hill in the Forest of Argonne, he did not run; but sank into the bushes and single-handed fought a battalion of German machine gunners until he made them come down that hill to him with their hands in air. There were one hundred and thirty-two of them left, and he marched them, prisoners, into the American line. Marshal Foch, in decorating him, said, "What you did was the greatest thing accomplished by any private soldier of all of the armies of Europe." His ancestors were cane-cutters and Indian fighters. Their lives were rich in the romance of adventure. They were men of strong hate and gentle love. His people have lived in the simplicity of the pioneer. This is not a war-story, but the tale of the making of a man. His ancestors were able to leave him but one legacy-an idea of American manhood. In the period that has elapsed since he came down from the mountains he has done three things-and any one of them would have marked him for distinction. (Summary by Sam Cowan)