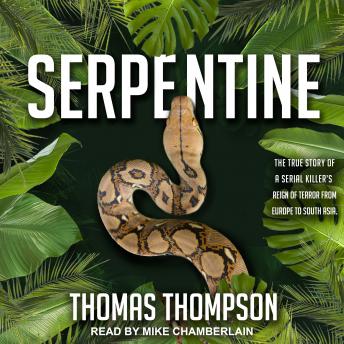 Download or Stream instantly more than 55,000 audiobooks.
Listen to "Serpentine" on your iOS and Android device.

There was no pattern to the murders, no common thread other than the fact that the victims were all vacationers, robbed of their possessions and slain in seemingly random crimes. Authorities across three continents and a dozen nations had no idea they were all looking for same man: Charles Sobhraj, a.k.a. 'The Serpent.'

A handsome Frenchman of Vietnamese and Indian origin, Sobhraj targeted backpackers on the 'hippie trail' between Europe and South Asia. A master of deception, he used his powerful intellect and considerable sex appeal to lure naïve travelers into a life of crime. When they threatened to turn on him, Sobhraj murdered his acolytes in cold blood. Between late 1975 and early 1976, a dozen corpses were found everywhere from the boulevards of Paris to the slopes of the Himalayas to the back alleys of Bangkok and Hong Kong. Some police experts believe the true number of Sobhraj's victims may be more than twice that amount.

Serpentine is the 'grotesque, baffling, and hypnotic' true story of one of the most bizarre killing sprees in modern history (San Francisco Chronicle). Edgar Award-winning author Thomas Thompson's mesmerizing portrait of a notorious sociopath and his helpless prey 'unravels like fiction, but afterwards haunts the reader like the document it is' (The Plain Dealer, Cleveland).