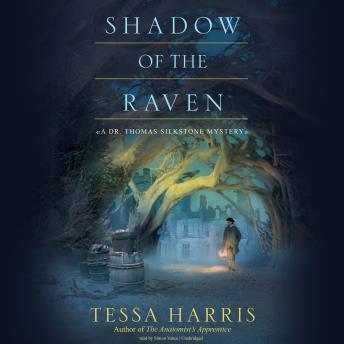 Shadow of the Raven: A Dr. Thomas Silkstone Mystery

Download or Stream instantly more than 55,000 audiobooks.
Listen to "Shadow of the Raven: A Dr. Thomas Silkstone Mystery" on your iOS and Android device.

In the notorious mental hospital known as Bedlam, Dr. Thomas Silkstone seeks out a patient with whom he is on intimate terms. But he is unprepared for the state in which he finds Lady Lydia Farrell. Shocked into action, Thomas vows to help free Lydia by appealing to the custodian of her affairs, Mr. Nicholas Lupton.

But when Silkstone arrives at the Boughton Estate to speak to Lupton, he finds that sweeping changes threaten to leave many villagers destitute. After a man dies in the woods, it appears that someone has turned to murder to avenge their cause. But for Thomas, a postmortem raises more questions than answers, and a second murder warns him of his potentially fatal situation. Soon he discovers a conspiracy far more sinister than anything he has ever faced.