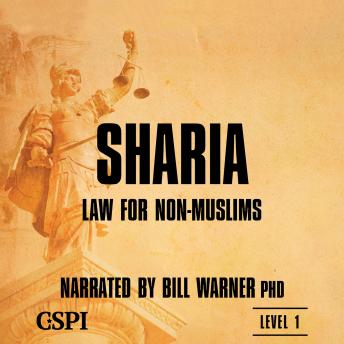 Download or Stream instantly more than 55,000 audiobooks.
Listen to "Sharia Law for Non-Muslims" on your iOS and Android device.

SHARIA LAW FOR NON-MUSLIMSSHARIA LAW FOR NON-MUSLIMS is an introduction to Islamic Sharia law and gives the reader a taste of Islam. This book makes an effective tool to educate politicians, legal authorities and public officials. Islam is a religion, a culture and a political system. The political system has its own body of laws, called the Sharia, which is derived from the Koran, the Sira (Mohammed's biography) and the Hadith (Mohammed's traditions). The Sharia is Allah's law and is considered superior to all other man-made laws. Many Sharia laws concern non-Muslims and how they are to be treated. Every demand that Muslims make is based on the idea of implementing Sharia law in our countries.What does Sharia law mean for non-Muslims? What are the long-term effects of granting Muslims the right to practice Sharia laws that conflict with ours? How can any political or legal authority make decisions about Sharia law if they do not know what it is?The answers to all of these questions are found in SHARIA LAW FOR NON-MUSLIMS.