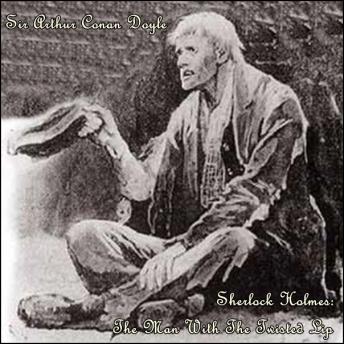 Sherlock Holmes: The Man With The Twisted Lip

Download or Stream instantly more than 55,000 audiobooks.
Listen to "Sherlock Holmes: The Man With The Twisted Lip" on your iOS and Android device.

"The Man With The Twisted Lip," one of the 56 short Sherlock Holmes stories written by the British author Sir Arthur Conan Doyle, is the sixth of the twelve stories in The Adventures of Sherlock Holmes. It was first published in the Strand Magazine in 1891. Neville St. Clair, a respectable businessman, has disappeared and his wife claims she saw him at the upper window of an opium den. When she entered the room, she only found a beggar. St. Clair's clothes are later found in the room, and his coat, laden with coins, in the River Thames outside the window. The beggar is arrested for murder, but a few days later St. Clair's wife receives a letter from her husband. Holmes considers, and washes the beggar to discover that is actually St. Clair, who confesses that he has been leading a double life as a beggar as the income is so large, but promises to stop begging if Holmes will keep his secret from his wife.