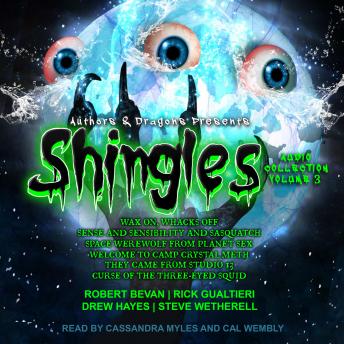 Download or Stream instantly more than 55,000 audiobooks.
Listen to "Shingles Audio Collection Volume 3" on your iOS and Android device.

Wax On, Whacks Off

Nobody likes getting bullied, and Donny has had enough. Deciding to take matters into his own hands, he solicits the help of the old Asian man at the end of his street to teach him Karate. During a grueling two days of training, Donny earns belt after belt, until he finally becomes a Karate Master.

But there is more to those belts than there seems. Cursed with ancient dark magic, they have a mind of their own. Will Donny be able to stand up to his bullies? Will he be able to overpower the will of the spirit trapped within the cursed belts?

Sense and Sensibility and Sasquatch

Following the death of their father, sisters Elinor and Marianne Dashwood are sent to toil at a rundown logging camp deep in Kentucky. Faced with the prospect of being married off to Colonel Brandon, the camp's elderly owner, Marianne comes up with the less-than-cunning plan of passing off the murderous man-ape that haunts the nearby forest as her fiance.

Both sense and sensibility take a back seat as Willoughby, as the beast is dubbed, tears a swath of destruction through Barton Woods. Can the Dashwood sisters triumph in the face of such carnage to find true love?