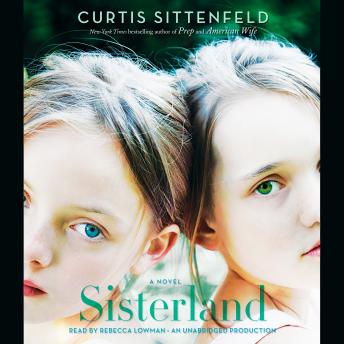 Download or Stream instantly more than 55,000 audiobooks.
Listen to "Sisterland: A Novel" on your iOS and Android device.

NAMED ONE OF THE BEST NOVELS OF THE YEAR BY
Slate • Daily Candy • St. Louis Post-Dispatch • The Guardian (U.K.)

“Novelists get called master storytellers all the time, but Sittenfeld really is one. . . . What might be most strikingly excellent about Sisterland is the way Sittenfeld depicts domesticity and motherhood.”—Maggie Shipstead, The Washington Post

“Psychologically vivid . . . Sisterland is a testament to [Curtis Sittenfeld’s] growing depth and assurance as a writer.”—Michiko Kakutani, The New York Times

“[Sittenfeld’s] gifts are in full effect with this novel, and she uses them to create a genuinely engrossing sense of uncertainty and suspense.”—Sloane Crosley, NPR’s All Things Considered

Curtis Sittenfeld, author of American Wife and Prep, returns with a mesmerizing novel of family and identity, loyalty and deception, and the delicate line between truth and belief.

From an early age, Kate and her identical twin sister, Violet, knew that they were unlike everyone else. Kate and Vi were born with peculiar “senses”—innate psychic abilities concerning future events and other people’s secrets. Though Vi embraced her visions, Kate did her best to hide them.

Now, years later, their different paths have led them both back to their hometown of St. Louis. Vi has pursued an eccentric career as a psychic medium, while Kate, a devoted wife and mother, has settled down in the suburbs to raise her two young children. But when a minor earthquake hits in the middle of the night, the normal life Kate has always wished for begins to shift. After Vi goes on television to share a premonition that another, more devastating earthquake will soon hit the St. Louis area, Kate is mortified. Equally troubling, however, is her fear that Vi may be right. As the date of the predicted earthquake quickly approaches, Kate is forced to reconcile her fraught relationship with her sister and to face truths about herself she’s long tried to deny.

Funny, haunting, and thought-provoking, Sisterland is a beautifully written novel of the obligation we have toward others, and the responsibility we take for ourselves. With her deep empathy, keen wisdom, and unerring talent for finding the extraordinary moments in our everyday lives, Curtis Sittenfeld is one of the most exceptional voices in literary fiction today.

“What’s most captivating about Sisterland is the intimate, intense portrayal of identical twin sisters. . . . [The novel] unfolds like a good prophecy—inevitable and shocking.”—San Francisco Chronicle

“The accomplished Sittenfeld . . . is as skillful as ever at developing an intriguing premise and likable characters. . . . Sittenfeld’s affectionate take on sibling rivalry is spot-on.”—People

“The power of [Sittenfeld’s] writing and the force of her vision challenge the notion that great fiction must be hard to read. She is a master of dramatic irony, creating fully realized social worlds before laying waste to her heroines’ understanding of them. . . . Her prose [is] a rich delight.”—The Boston Globe

“Wise and often wickedly entertaining . . . Readers who have siblings—especially women with sisters—will likely come away feeling as if the author really is psychic.”—USA Today