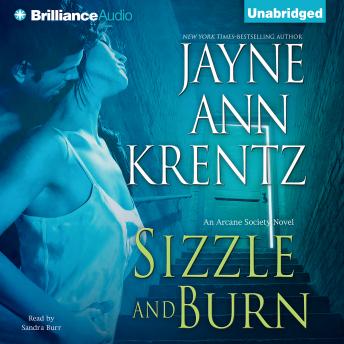 Download or Stream instantly more than 55,000 audiobooks.
Listen to "Sizzle and Burn" on your iOS and Android device.

Being called creepy can be hard on your self-esteem - even for an attractive, independent woman like Raine Tallentyre. That’s what happened when she made the mistake of revealing her paranormal abilities, bringing her most recent romantic relationship to a hasty end. Her aunt Vella, a gifted but troubled soul, told her years ago to keep her talents a secret. And now that poor Aunt Vella - her last blood relative - has died, Raine has resigned herself to a lonely life.

But when she journeys to Shelbyville, Washington, to clear out her aunt’s house - trying to ignore the locals’ comments about the “witch” and the “crazy lady” - Raine’s highly developed sensitivity leads her to a horrifying discovery: a young woman, bound and terrified, in a basement storage locker. The victim has survived, and the culprit is on the loose. Without warning, a new man enters Raine’s life - investigator Zack Jones. Surprisingly, Zack isn’t repelled by her powers: in fact, he has his own. While Raine hears voices, Zack sees visions, and within hours of their meeting, Raine experiences an intense, thrilling intimacy - mental, emotional, and physical - that she never dared to expect.

There’s one complication, however: Zack Jones is working for the Arcane Society. This secret organization, dedicated to the study of paranormal phenomena, shattered Raine’s family with an act of betrayal long ago, and she’s not about to trust them now. As a killer makes her his target, and a cabal of psychic criminals known as Nightshade operates in the shadows surrounding them, Raine and Zack must rely not only on their powerful abilities but on each other as well.