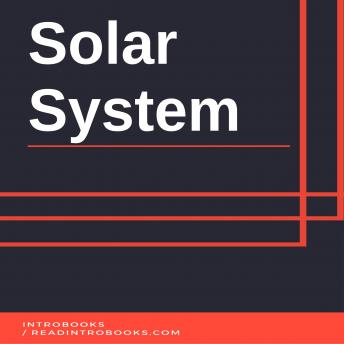 Download or Stream instantly more than 55,000 audiobooks.
Listen to "Solar System" on your iOS and Android device.

As you all might know solar system is a gravitationally bound system. It consists of the sun and all the objects that orbit it. These objects might orbit the sun either directly or indirectly. The eight planets are the largest objects that orbit the sun directly. Rests of them are significantly smaller objects such as dwarf planets, small solar system bodies etc. It is said that solar system was formed about 4.6 billion years ago. The reason behind such gigantic formation was gravitational collapse of an interstellar molecular cloud that has the size even bigger than our current solar system.


Most amount of the system's mass is packed within the sun itself. A significant amount of remaining mass is contained in Jupiter. Main eight planets are often studied in two groups, inner planets and outer planets. Inner planets are mercury, Venus, Earth and Mars. These planets are often referred as terrestrial planets since their primary elements are rock and metals. Remaining outer planets are also referred as giant planets since they are noticeably massive compared to inner planets. Two largest among them that are Jupiter and Venus are known as gas giants since they are mainly formed with hydrogen and helium. Remaining two outermost planets are known as ice giants (Uranus & Neptune). These ice giants are formed with elements with high melting points compared to hydrogen and helium. These elements are called ices such as water, ammonia and methane. All planets possess their unique orbit that is almost circular. These orbits lie within a flat surface that is known as ecliptic.


Along with these super large planets, there are smaller objects too. Between the orbits of mars and Jupiter, there lies a group of objects such as terrestrial planets or rocks and metals, etc. This area or group is known as asteroid belt. It is noticeable that our solar system does not end with the orbit of Neptune. Kuiper belt and scattered discs are located beyond Neptune's orbit. They are also considered a part of our solar system. Kuiper belt and scattered discs are group of trans-Neptunian objects. Most of them are formed with ices. Beyond kuiper belt, population of sednoids have been discover in near past. Together all these populations tend to hold more than ten thousand objects. These objects are large enough to hold their own gravity field around them. Such objects are referred as dwarf planets. Asteroid Ceres and trans-Neptunian objects Pluto and Eris are known dwarf planets. It is noticeable that Pluto was considered a planet in the past, however, not any more. In these regions, other minor objects such as comets, centaurs and interplanetary dust freely travel from on region to another. Six planets from main eight planets, four dwarf planets and many minor objects are orbited by natural satellites that we refer as moon or moons. Almost every outer planer is encircled with planetary rings made of dust and other objects. Venus and Jupiter have a clearly visible planetary ring where Uranus and Neptune have thinner one. In this book we will cover all the basic concepts that will help you to understand vast theories later on in dipper studies.