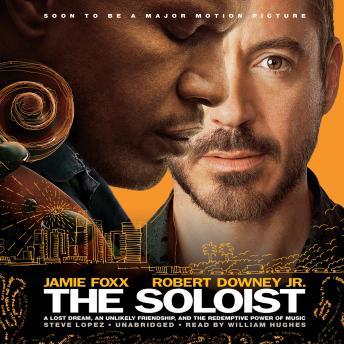 The Soloist: A Lost Dream, an Unlikely Friendship, and the Redemptive Power of Music

Download or Stream instantly more than 55,000 audiobooks.
Listen to "The Soloist: A Lost Dream, an Unlikely Friendship, and the Redemptive Power of Music" on your iOS and Android device.

When journalist Steve Lopez sees Nathaniel Ayers playing his heart out on a two-string violin on Los Angeles' skid row, he finds it impossible to walk away. More than thirty years ago, Ayers was a promising classical bass student at Juilliard-ambitious, charming, and also one of the few African-Americans-until he gradually lost his ability to function, overcome by schizophrenia. Over time, the two men form a bond and Lopez imagines that he might be able to change Ayers's life. The Soloist is a beautifully told story of devotion in the face of seemingly unbeatable challenges.