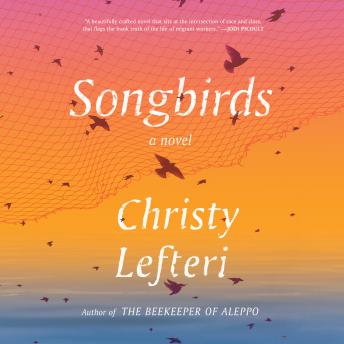 Download or Stream instantly more than 55,000 audiobooks.
Listen to "Songbirds: A Novel" on your iOS and Android device.

“A beautifully crafted novel that sits at the intersection of race and class, that flags the frank truth of the life of migrant workers for whom a flight to freedom can become the most finely woven trap.”—JODI PICOULT, #1 New York Times bestselling author of The Book of Two Ways

From the prize-winning author of The Beekeeper of Aleppo comes Songbirds, a stunning novel about the disappearance of a Sri Lankan domestic worker and how the most vulnerable people find their voices.

Living on the island of Cyprus, Nisha is far from her native Sri Lanka. Though she longs to return home, she knows that working as a “maid” for a wealthy widow is the only way to earn enough to support her daughter, left behind to be raised by relatives.

Yiannis is a poacher, trapping the tiny protected songbirds that stop in Cyprus as they migrate each year from Africa to Europe and selling them on the illegal market. He dreams of finding a new way of life, and of marrying Nisha.

But one night, Nisha makes dinner, an aromatic dahl curry, for the family who pays her: Petra and her daughter Aliki. Then, after she cleans the kitchen and tucks Aliki into bed, Nisha goes out on a mysterious errand, and vanishes.

When the police refuse to pursue the case, Petra takes on the investigation herself, a path that leads her to Nisha’s friends—other workers in the neighborhood—and to the darker side of a migrant’s life, where impossible choices leave them vulnerable, captive, and worse.

Inspired by the real-life disappearance of domestic workers in Cyprus, Christy Lefteri has crafted a poignant, deeply empathetic narrative of the human stories behind the headlines. With infinite tenderness and skill, Songbirds offers a triumphant story of the fight for truth and justice, and of women reclaiming their lost voices.