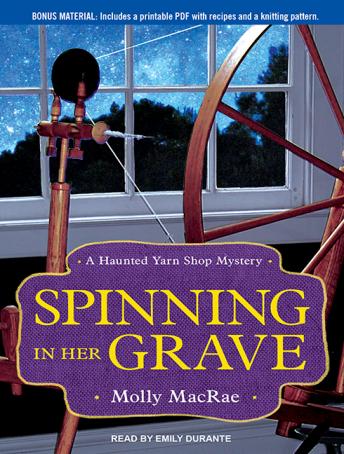 Spinning in Her Grave

Download or Stream instantly more than 55,000 audiobooks.
Listen to "Spinning in Her Grave" on your iOS and Android device.

It's time for Blue Plum's annual historical festival, and everyone-including Kath and her spunky fiber and needlework group, TGIF-is getting in on the action. Expert spinners are being gathered, and a businessman has approached Kath about using the second-floor windows of her store for part of a reenactment. But the reenactment ends in real-life bloodshed when local baker Reva Louise Snapp is shot-with a bullet from a modern-day gun.

Kath has her theories about who wanted to end Reva Louise's life. But there's also talk of a sniper stalking Blue Plum, and Kath's shop is suspected to be the murderer's hideout. Now Kath, her TGIF pals, and the gloomy ghost, Geneva, must unravel the mystery quickly, or someone else might be left hanging by a thread...