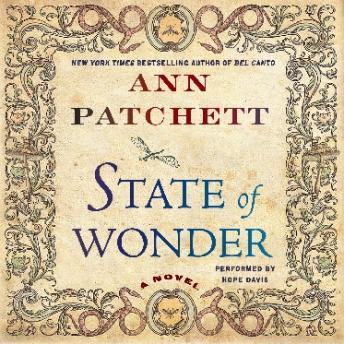 State of Wonder: A Novel

Download or Stream instantly more than 55,000 audiobooks.
Listen to "State of Wonder: A Novel" on your iOS and Android device.

Marina Singh is a research scientist at Vogel, a pharmaceutical institute in Minnesota, and inconveniently in love with her boss, Mr. Fox. When one of her colleagues is reported to have died while following up on the progress of a field team based in Brazil, Marina is dispatched by Mr. Fox to the Amazon to uncover the truth of his death. And his widow wants his effects. She travels to Manaus, then down into the Amazonian delta, deep into the dense, dark, insect-infested jungle. The research team is looking into the development of a new miracle drug that could revolutionize Western society. A local tribe has the bark of a certain tree, it yields a substance which allows them to conceive late into middle age: many of the women are getting pregnant into their sixties and seventies. The problem is that the team is taking too long: they have been silent for two years, and Marina has been tasked to find out what is holding back their progress. The second problem is more serious: the team is being headed up by the daunting figure of Annick Swenson, an eminent and fiercely uncompromising scientist who was once Marina’s colleague, and towards whom Marina has very complicated feelings. What Marina learns will change her life. In a novel that is packed with amazing twists and surprises, Ann Patchett returns with immense confidence to a broad canvas, teeming with atmosphere and characters and rich with narrative. Remarkable events--fights with anacondas; encounters with cannibals; deaths; re-births--and profound moral decisions come together in a novel that will enthrall her many readers and fans and is guaranteed to be a major bestseller.

Infusing the narrative with the same ingenuity and emotional urgency that pervaded her acclaimed previous novels Bel Canto, Taft, Run, The Magician’s Assistant, and The Patron Saint of Liars, Patchett  delivers an enthralling, innovative tale of aspiration, exploration, and attachment in State of Wonder—a gripping adventure story and a profound look at the difficult choices we make in the name of discovery and love.