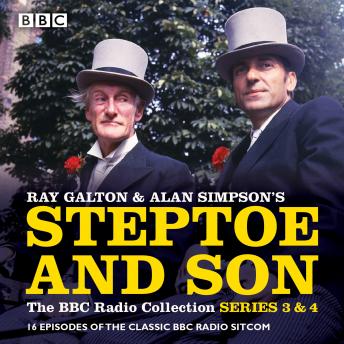 Download or Stream instantly more than 55,000 audiobooks.
Listen to "Steptoe & Son: Series 3 & 4: 16 episodes of the classic BBC radio sitcom" on your iOS and Android device.

Steptoe and Son ran for eight series on BBC TV and even spawned two feature films. Such was the series’ popularity in the mid-1960s that the cast specially recorded numerous episodes for BBC radio.

Here, collected together for the first time, are all the episodes from the third and fourth radio series, scripted and adapted for radio by Hancock’s Half Hour creators Ray Galton and Alan Simpson. In these hilarious episodes, Harold breaks some sad news to Albert; introduces his fiancée to his father; meets his older half-brother and receives some unexpected news from a visitor. Plus, a group of card sharks fleece Albert; Harold and Albert argue over their lack of money; Harold’s wedding day doesn’t go quite to plan and Albert is worried about an offer made to Harold.

The episodes included are A Death in the Family, Two’s Company, Tea for Two, TB or not TB, Without Prejudice, Cuckoo in the Nest, Steptoe and Son – and Son!, Robbery with Violence, Full House, Is That Your Horse Outside?, The Lodger, A Box in Town, The Three Feathers, The Colour Problem, And Afterwards At… and Any Old Iron. Also included is a selection of trailers prepared for overseas radio broadcast.