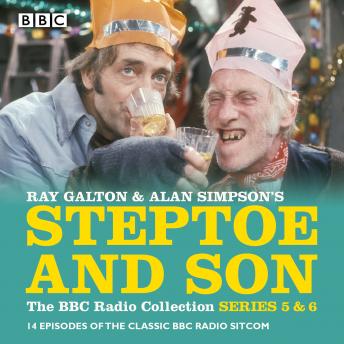 Download or Stream instantly more than 55,000 audiobooks.
Listen to "Steptoe & Son: Series 5 & 6: 15 episodes of the classic BBC radio sitcom" on your iOS and Android device.

Series 5 and 6 of the vintage radio sitcom starring Harry H Corbett and Wilfrid Brambell, adapted from the much-loved TV series.

Steptoe and Son was hugely successful, with eight series broadcast on BBC TV and two spin-off feature films. So popular was the show that many episodes were subsequently recorded for BBC radio.

Collected together for the first time, here are all the episodes from the fifth and sixth radio series, scripted and adapted for radio by Hancock's Half Hour creators Ray Galton and Alan Simpson. In these classic episodes, Harold conquers his fear of ballroom dancing; falls for his drama society's leading lady; plans a solo holiday and pens an article for the church magazine. Plus, Albert is startled by his son's sleepwalking; tangles with the tax inspector; tackles some extortionists (with the help of his kung fu club) and becomes involved in spiritualism.

The episodes included are The Desperate Hours; Come Dancing; A Star is Born; A Winter's Tale; Men of Property; Men of Letters; Loathe Story; Oh, What a Beautiful Mourning; Live Now, PAYE Later; Upstairs, Downstairs, Upstairs, Downstairs; And So To Bed; Porn Yesterday; The Seven Steptoerai; Seance in a Wet Rag and Bone Yard; and a Christmas special, first broadcast as part of David Jacobs' Crackers in 1976. Also included are two bonus Steptoe and Son sketches: Scotch on the Rocks, from the 1978 Radio 2 show Good Luck, Scotland and a special insert from BBC1's Christmas Night with the Stars from 1967. Duration: 8 hours approx.