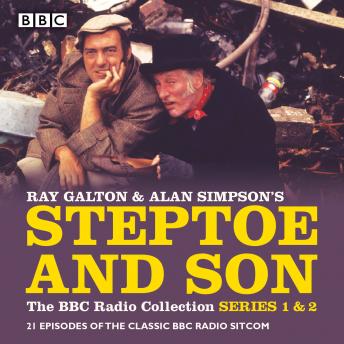 Download or Stream instantly more than 55,000 audiobooks.
Listen to "Steptoe & Son: The BBC Radio Collection: Series 1 & 2: 21 episodes of the classic BBC radio sitcom" on your iOS and Android device.

Series 1 and 2 of the classic radio sitcom starring Harry H. Corbett and Wilfred Brambell, adapted from the much-loved TV series.

Steptoe and Son ran for eight series on BBC TV and even spawned two feature films. Such was the series' popularity in the mid-1960s that the cast specially recorded several episodes for BBC radio.

Here, collected together for the first time, are all 21 episodes from the first and second radio series, scripted by Hancock's Half Hour creators Ray Galton and Alan Simpson and adapted by Gale Pedrick. Among the classic comic incidents in these timeless episodes, Albert's 65th birthday turns into a disaster; Harold finds love with a French girl; Albert is upset by Harold's plans for a proper bathroom; and the duo get an irresistible offer. Plus, Albert and Harold's creditors arrive seeking payment; two coffins lead to a burst of superstition; Harold regrets taking Albert to the cinema; and Albert disrupts Harold's Labour Party meeting.

The episodes included are The Offer; The Bird; Sixty-Five Today; The Stepmother; The Economist; Wallah-Wallah Catsmeat; The Diploma; Steptoe à la Cart; The Holiday; The Bath; The Lead Man Cometh; A Musical Evening; The Bonds That Bind Us; The Siege of Steptoe Street; Pilgrim's Progress; The Wooden Overcoats; Sunday for Seven Days; The Piano; My Old Man's a Tory; Homes Fit for Heroes; Crossed Swords. Also included are two bonus features: a short 1966 Steptoe & Son sketch from The Ken Dodd Show and a selection of trailers prepared for overseas broadcast.