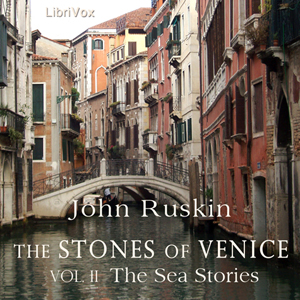 The Stones of Venice, Volume 2

Download or Stream instantly more than 55,000 audiobooks.
Listen to "The Stones of Venice, Volume 2" on your iOS and Android device.

The Stones of Venice is a three-volume treatise on Venetian art and architecture by English art historian John Ruskin, first published from 1851 to 1853. Intending to prove how the architecture in Venice exemplified the principles he discussed in his earlier work, The Seven Lamps of Architecture, Ruskin examined the city in detail, describing for example over eighty churches. He discusses architecture of Venice's Byzantine, Gothic and Renaissance periods, and provides a general history of the city as well. The book aroused considerable interest in Victorian Britain and beyond. The chapter "The Nature of Gothic" (from volume 2) was admired by William Morris, who published it separately in an edition which is in itself an example of Gothic revival. It inspired Marcel Proust; the narrator of the Recherche visits Venice with his mother in a state of enthusiasm for Ruskin. The Stones of Venice is considered one of the most influential books of the 19th century. (Summary adapted from the Wikipedia by Leni)