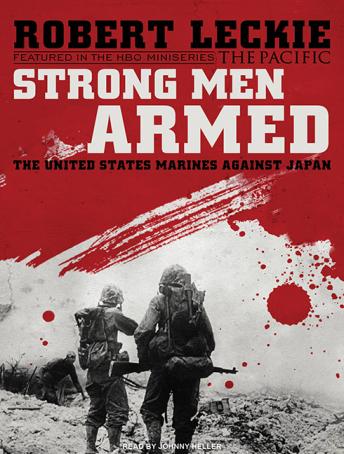 Download or Stream instantly more than 55,000 audiobooks.
Listen to "Strong Men Armed: The United States Marines Against Japan" on your iOS and Android device.

Written by Robert Leckie, whose wartime exploits are featured in the Tom Hanks/Steven Spielberg HBO miniseries The Pacific, Strong Men Armed is the perennial bestselling classic account of the U.S. Marines' relentless drive through the Pacific during World War II. As scout and machine-gunner for the First Marine Division, Leckie fought in all its engagements until his wounding at Peleliu.

In Strong Men Armed, Leckie uses firsthand experience and impeccable research to re-create the nightmarish battles of the Pacific campaign-from Guadalcanal to Okinawa-as ships, men, and guns moved over vast distances to fight an enemy that was willing to defend to its last man. Here is the whole sweeping epic of the Marines who battled-and won-on the bloody beaches at Guadalcanal, the unforgiving reefs at Tarawa, the rain-soaked mud of New Britain, the dark gray soil and deadly caves of Mount Suribachi, and the muddy slopes of Shuri Castle on Okinawa. It is a masterful narrative by a writer the New York Times praised as possessing the 'rare gift of capturing all that is human in the most inhuman of man's activities.'