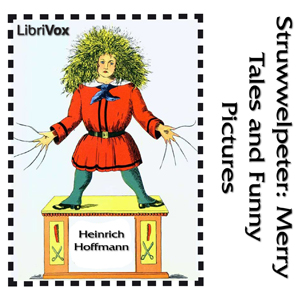 Download or Stream instantly more than 55,000 audiobooks.
Listen to "Struwwelpeter" on your iOS and Android device.

Struwwelpeter (Slovenly Peter) is an illustrated collection of humorous children's poems describing ludicrous and usually violent punishments for naughty behavior. Hoffmann, a Frankfurt physician, wanted to buy a picture book for his son for Christmas in 1844. Not impressed by what the stores had to offer, he instead bought a notebook and wrote his own stories and pictures. While Struwwelpeter is somewhat notorious for its perceived brutal treatment of the erring children, it has been influential on many later children's books, most notably Charlie and the Chocolate Factory. (Summary by Catharine and wikipedia.org)