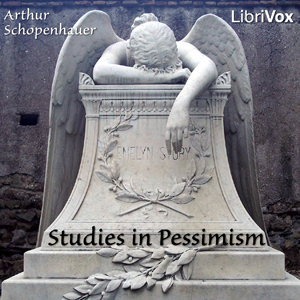 Download or Stream instantly more than 55,000 audiobooks.
Listen to "Studies in Pessimism" on your iOS and Android device.

Arthur Schopenhauer, an early 19th century philosopher, made significant contributions to metaphysics, ethics, and aesthetics. His work also informed theories of evolution and psychology, largely through his theory of the will to power - a concept which Nietzsche famously adopted and developed. Despite this, he is today, as he was during his life, overshadowed by his contemporary, Hegel. Schopenhauer's social/psychological views, put forth in this work and in others, are directly derived from his metaphysics, which was strongly influenced by Eastern thought. His pessimism forms an interesting and perhaps questionable contrast with his obvious joy in self-expression, both in the elegance of his prose and in his practice of playing the flute nightly.