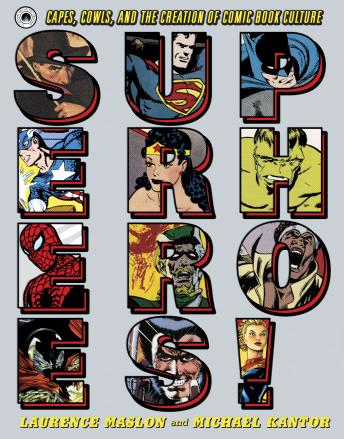 Superheroes!: Capes, Cowls, and the Creation of Comic Book Culture

Download or Stream instantly more than 55,000 audiobooks.
Listen to "Superheroes!: Capes, Cowls, and the Creation of Comic Book Culture" on your iOS and Android device.

Superman, Batman, Spider-Man, Iron Man, Wonder Woman, the Avengers, the X-Men, Watchmen, and more: the companion volume to the PBS documentary series of the same name that tells the story of the superhero in American popular culture.

Together again for the first time, here come the greatest comic book superheroes ever assembled between two covers:  down from the heavens—Superman and the Mighty Thor—or swinging over rooftops—the Batman and Spider-Man; star-spangled, like Captain America and Wonder Woman, or clad in darkness, like the Shadow and Spawn; facing down super-villains on their own, like the Flash and the Punisher or gathered together in a team of champions, like the Avengers and the X-Men!

Based on the three-part PBS documentary series Superheroes, this companion volume chronicles the never-ending battle of the comic book industry, its greatest creators, and its greatest creations.  Covering the effect of superheroes on American culture—in print, on film and television, and in digital media—and the effect of American culture on its superheroes, Superheroes: Capes, Cowls, and the Creation of Comic Book Culture appeals to readers of all ages, from the casual observer of the phenomenon to the most exacting fan of the genre.

Drawing from more than 50 new interviews conducted expressly for Superheroes!—creators from Stan Lee to Grant Morrison, commentators from Michael Chabon to Jules Feiffer, actors from Adam West to Lynda Carter, and filmmakers such as Zach Snyder—this is an up-to-the-minute narrative history of the superhero, from the comic strip adventurers of the Great Depression, up to the blockbuster CGI movie superstars of the 21st Century. Superheroes! is the definitive story of this powerful presence in pop culture.

BONUS FEATURE:  Exclusive first-hand commentary from some of the greatest creators in comic book history, from Golden Age artists and writers (Carmine Infantino, Joe Kubert, Stan Lee) to the superstars of the Silver Age (Neal Adams, Jim Steranko, Denny O'Neil)--all the way up to the movers and shakers of the 21st Century (Todd McFarlane, Joe Quesada); plus luminaries such as Adam West, Jules Feiffer and Michael Chabon.