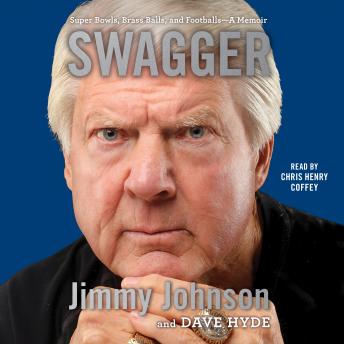 Download or Stream instantly more than 55,000 audiobooks.
Listen to "Swagger: Super Bowls, Brass Balls, and Footballs—A Memoir" on your iOS and Android device.

From FOX NFL Sunday analyst and legendary Hall of Fame head football coach Jimmy Johnson—the first to win both a college football championship and a Super Bowl—the long-awaited, intimate, no-regrets memoir recounting his extraordinary life and insightful lessons on winning, at every level.

Hall of Fame football coach Jimmy Johnson’s house isn’t on the way to anything. Yet, his private sanctuary on the Florida Keys’ Islamorada islands is a popular destination to which college and professional coaches, general managers, and team owners regularly trek to seek advice—how to build a positive team culture, draft elite players, balance work and family life, and lead a team to win. Why? Because Jimmy Johnson has done it all—rising through the college coaching ranks to lead the University of Miami Hurricanes to a national championship, winning two consecutive Super Bowls with the Dallas Cowboys, and handling public triumphs while dealing with private adversity. Now, in Swagger, written with veteran sports journalist Dave Hyde, Johnson shares a candid account of his life experiences that have turned him into a legend in the coaching world.

From his early days on the college football fields at Louisiana Tech to his arrival as the Cowboys’ coach in 1989, Swagger traces the history of Johnson’s career, and his lifelong mission to win. His larger-than-life personality and hard-driving, tough-talking coaching style led him to become one of only six coaches in NFL history to win back-to-back Super Bowls. Swagger shows the behind-the-scenes details of his professional conflict with Cowboys owner Jerry Jones and his personal revelations following his mother’s death and his son’s struggle with addiction. It reveals Johnson’s formula for winning, including his criteria for identifying talent, his core beliefs, how he replaced legendary coaches like Tom Landry and Don Shula, coached stars from a young Troy Aikman to an aging Dan Marino, and established the ever-elusive sense of “culture” that every team leader hopes to achieve. More than a highlight reel, Swagger reveals the hard-won lessons Jimmy Johnson has learned both as a man and as a coach through a lifetime dedicated to excellence.