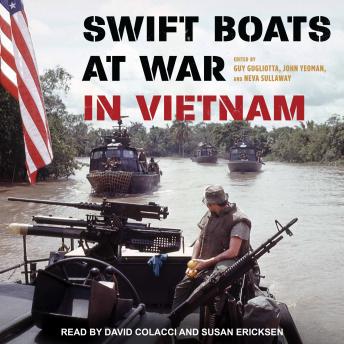 Swift Boats at War in Vietnam

Download or Stream instantly more than 55,000 audiobooks.
Listen to "Swift Boats at War in Vietnam" on your iOS and Android device.

Developed specifically for the Vietnam War (and made famous by the 2004 presidential campaign), Swift Boats were versatile craft 'big enough to outrun anything they couldn't outfight' but too small to handle even a moderate ocean chop, too loud to sneak up on anyone, and too flimsy to withstand the mildest of rocket attacks. This made more difficult an already tough mission: navigating coastal waters for ships and sampans smuggling contraband to the Viet Cong, disrupting enemy supply lines on the rivers and canals of the Mekong Delta, and inserting SEALs behind enemy lines. The stories in this book cover the Swift Boats' early years, which saw search-and-inspect operations in Vietnam's coastal waters, and their later years, when the Swift Boats' mission shifted to the Mekong Delta's labyrinth of 3,000 miles of rivers, streams, and canals. This is an intimate, exciting oral history of Swift Boats at war in Vietnam.